Obama movers
The square mover from the bridge to the base of Obamas building as below, and the mover up the elevator shaft in the second and third images, represent the smooth charisma Obama portrays. The outward radiating texture of the movers resembles the ripples in society that an action that Obama makes can create. 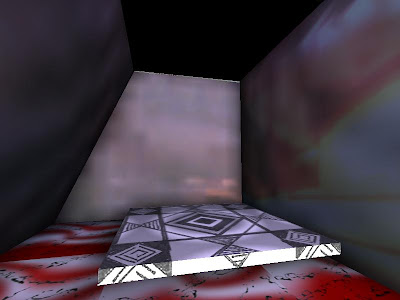 View from the elevator: 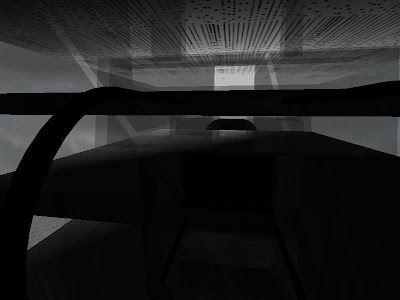 Up the elevator shaft: 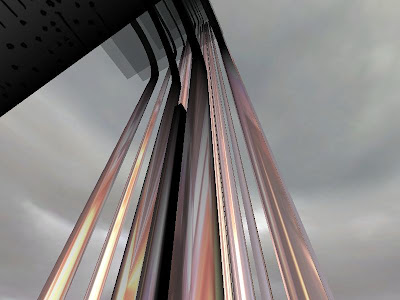 Another mover was used that takes the player from the top of Obamas building, and deposits them on the first mover of Madonnas building. I did not take a picture of this in situ as I had issues with figuring out the lighting on all the static meshes. It is coloured and shaped to look like the podium with microphones that Obama would make speak from at press conferences.

Madonnas movers are curved in form, reflecting the same sexual aspects as the curved shapes of the her building.

The mover below takes the player from the platform on Madonnas building up to the bridge. It is cocoon shaped, almost like a bath, where the player feels enveloped. As it reaches the top, the player is tipped into the bridge.

A texture, used to represent the word 'sensual' has been used on the mover, but cannot be seen. I had problems trying to apply textures to static meshes, and not all came out at a visible size. 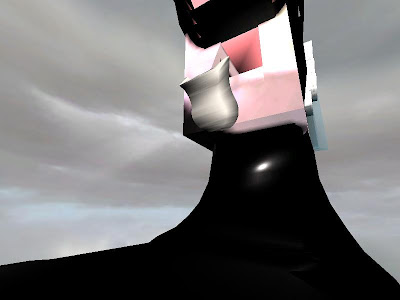 As a player is deposited onto Madonnas first mover, the mover rotates to drop the player slowly onto the next mover below. Each mover does the same action to give a cascading effect, slowing down the players fall as they drop from each consecutive mover.

The movers are shaped to resemble a cushion, so that the effect as one falls would be that one is dropping from cushion to cushion; being enveloped and then released to a soft landing at the base of the building. I wanted this effect to highlight the softer side of Madonnas sexuality as opposed to the dominatrix-like power that was mentioned in the mashup article. A texture has been applied that resembles almost liquid, curving forms that envelop each other. 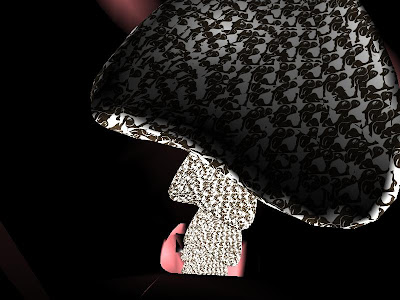