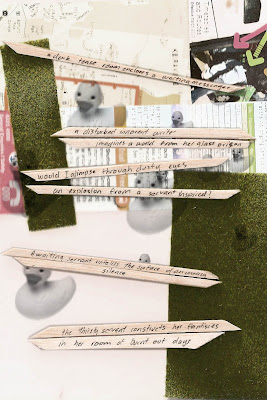 The key concepts I tried to capture in my narratives is a feeling of uneasiness, of silence, longing, entrapment and tension. I want there to be a sense of imagination and potential, like a person straining to be free, imagining a life outside the box, but throughout pervading a sense of loneliness and endless monotony.
An influence on my narratives are the poems of T.S. Elliot, whose Preludes from Prufrock and Other Observations I learned about during school and enjoyed. The words "burnt out days" and concepts relating to dust are drawn from the phrase:
One line that particularly resonated with me was the second last phrase which goes:
This seemed to me the exact message I want to convey in my model; the idea of fancies and fantasies that only just cling to the person imagining them. The "infinitely gentle, infinitely suffering thing" seems to me the romantic version of the maid, forever caught in the tedium of serving another, gentle in manner and suffering under the monotony of every day life.
The narratives I would base my model and building concept on would likely revolve around the last two narratives I submitted:
The thirsty servant constructs fantasies in her room of burnt out days
and
A waiting servant unfolds the surface of an uneasy silence
Posted by Ashleigh Ng at 10:47 PM No comments: 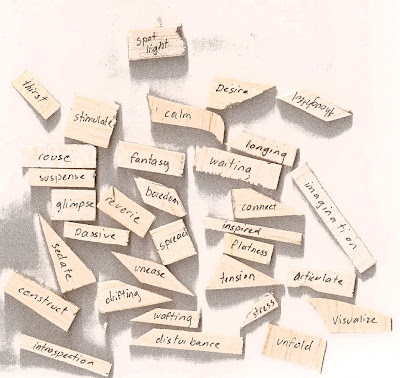 Posted by Ashleigh Ng at 4:11 PM No comments: 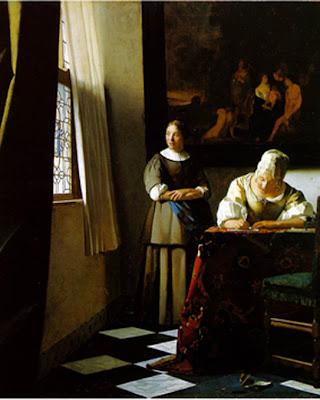 For this project, I decided to use the painting Lady Writing A Letter With Her Maid by Vermeer, as inspiration.
I chose this painting for it's comparison and portrayal of the two women, the subject matter and the atmosphere created. One woman, the lady of the house, sits at the table, writing a letter in response to a letter or book that has been opened and pushed to the floor in a moment of drama. It is interesting to note that it appears that the scene has been captured just as the moment has occurred, otherwise it is likely that the maid would have retrieved the fallen objects in accordance with the Dutch tradition of cleanliness. While the light from the window falls on the lady writing the letter, it is the maids face that can be seen as she gazes at the window to her right. She stands in the middle of the painting, composed and statuesque, in contrast to the lady to the side of the painting, bent over her writing.
While the vanishing point of the objects in the painting and the light from the window leads to the lady at the desk, I found myself focusing on the maid in the center, staring into the space of the window. I found myself wondering what she was thinking, at the expression on her face, and her role in the household. It is perhaps because her expression was visible, that she was standing quiet and contemplating, that I could imagine more vividly scenarios and themes in accordance with her character. The words and narratives I developed revolve primarily around her rather than the mistress.
Posted by Ashleigh Ng at 3:35 PM No comments:

Chestnut Hill, Philadelphia, Pennsylvania
In these poches, I attempted to show light filled rooms, full of furniture. The furniture was added as it shows the homely, lived in atmosphere and materiality of the rooms. This is important as the house is highly specific to Venturis mother, Vanna Venturi, and whose antique furniture was taken into account when the house was designed. 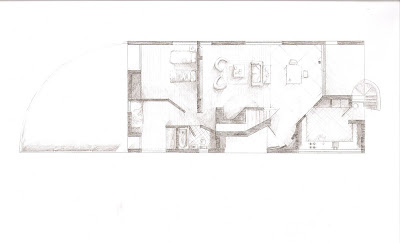 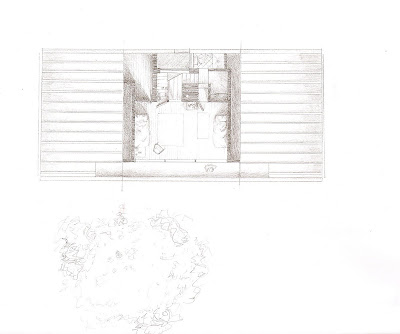 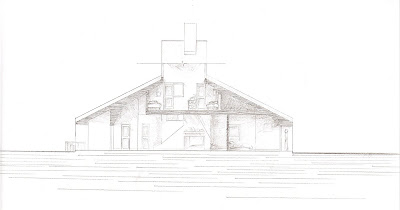 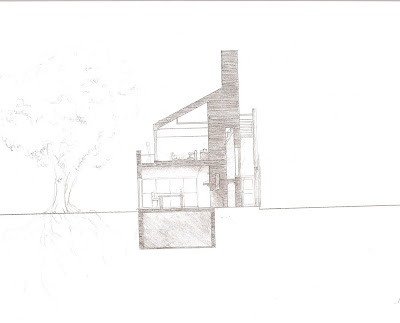 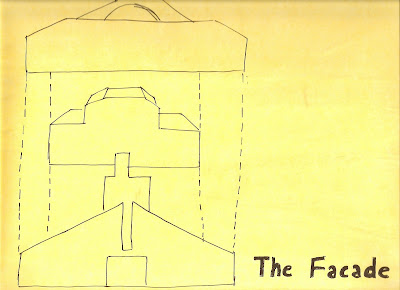 In this parti, I attempted to explain the importance of the facade, and how the interior living space sits behind it. The facade is a strong, triangular shaped element that does not mimic the living space behind it, but defines this shape and encloses it. The result of such a strong shape with long diagonals is that voids and spaces exist within the living space that cannot be filled by humans. Such spaces are then either closed off or used as storage areas. 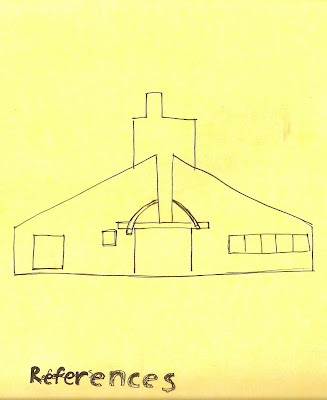 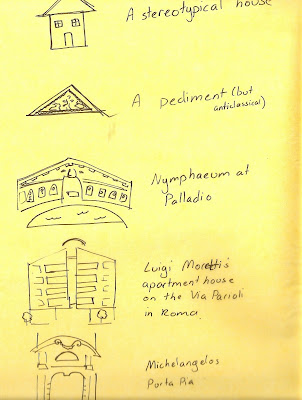 The facade further references both classical and modern schemes and buildings. These include a pediment, a feature of classical architecture such as that we are studying currently in history. It is important to note that Venturi seems to almost be satirizing the elements of such classical architecture by subverting the concepts or rendering them redundant. For example, the arch is usually a structural element, but in Venturis house it is made useless by simply being stuck on the front of the facade. Another example is the pediment shaped roof, which instead of running across the shorter length of a building, runs along the longer length of the building. 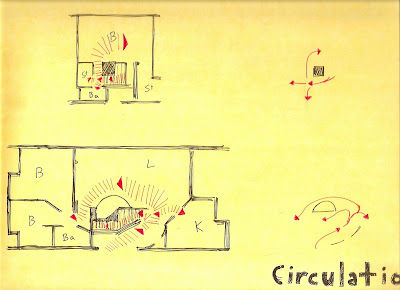 The circulation in Venturi's Mothers House is important as it is governed by the central core, and interior wall structure. Occupants move in a circular, wandering fashion, governed by the placement of the front entrance, curved walls and fireplace, and stairwells.
Posted by Ashleigh Ng at 11:48 PM No comments:

Robert Venturi’s Mothers House is an example of an architecture that has many nuances and subtleties woven throughout the facade and structure. It references historical architecture, ideas involving enclosure, geometry, circulation, and the importance of the facade. Through the material, construction and section cut of the model, we have attempted to communicate across the elements of the Venturi House that we thought were the most significant. 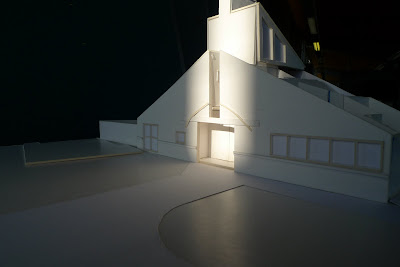 The material that we chose to construct the model is 400 GSM card, with a shiny surface. While we had the option of using balsa wood, we felt that card was the best choice for this building as you achieve a flat continuous surface that would correctly represent the flat planes of the roof and enclosing walls. With card, you can also achieve a precise and clean edge. This is important when considering the strong edges and unbroken lines of the front facade and roof. 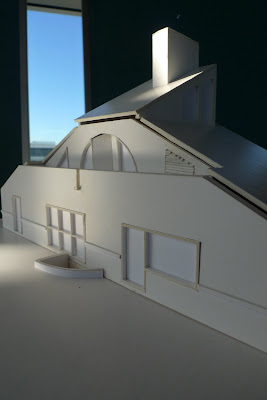 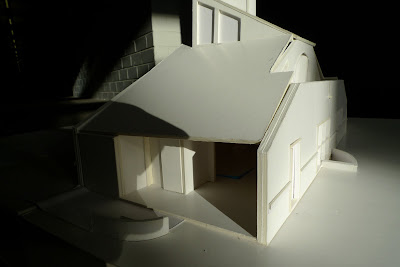 The smoothness of the card also reflects the smooth texture of the roof and walls of the house.

We felt that facade was the strongest element of the house. The shape and height of the front facade almost a monument to a person approaching the house, because of its individual shape and its placement, set far back on a long site. The importance of the facade is further created through the references it makes to historical architecture, as mentioned in the text accompanying the poches below. 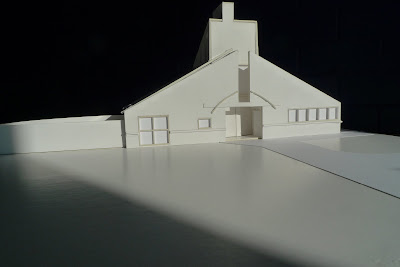 The structure of the house, and how it influences circulation also influenced the construction, and the section cut, of the model. The central core of the house involving flights of stairs, a chimney, and a fire place, as well as the placement of curved walls lack of corridors, means that a person moves through the house in a circular, wandering fashion around the central core. This is also discussed in the poches below. 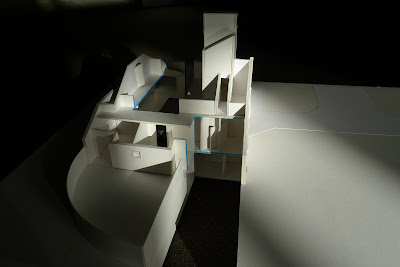 We decided that we would be more inventive with our choice of section cut. We felt that it would not do justice to the facade and roof if we were to cut it in any way, as would have occurred had we just simply chosen to do a cross section or a longitudinal cut. Our group decided that it would be interesting if we were to leave the central core and facade intact, and pull the rest of the model, including rear rooms, away from the facade. This way, we were able to keep the integrity of the core and facade, while still being able to examine the rooms and floors of the house. The only downside to this method of section cut was that one is unable to easily follow the path that a person is able to walk through the house, as would be visible in a plan. We felt however, that we had succeeded in creating an interesting section cut, while preserving the key elements of the core and facade. 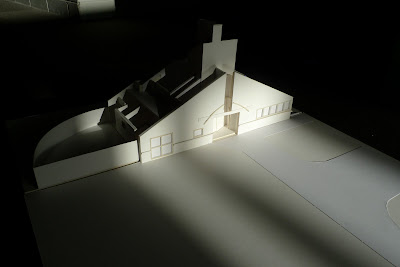 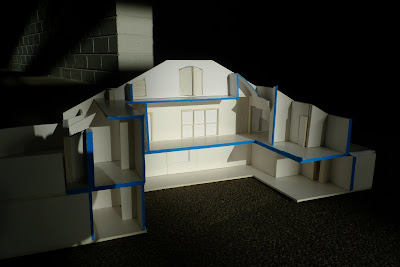 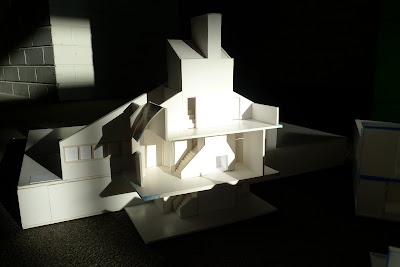 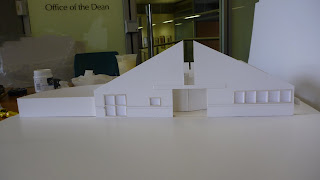 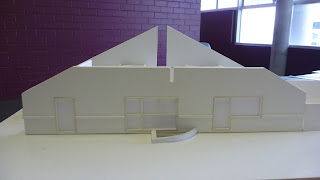 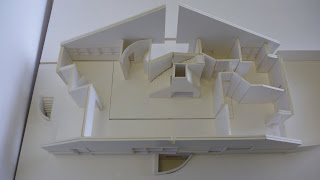 View from top without roof 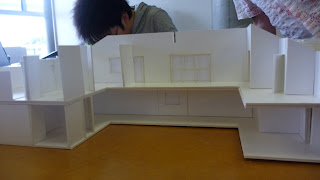 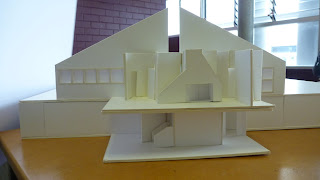 Section Cut
Posted by Ashleigh Ng at 6:56 PM No comments: