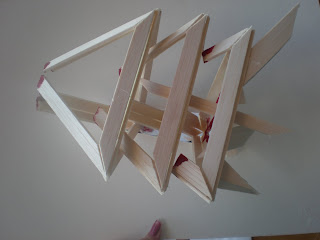 In this project I was attempting to combine aspects of destruction with the concept of the fold. My model was inspired by an origami folded star given to me by a friend, which was accidentally crushed when some architecture books fell on it.
The balsa wood triangles mimic the triangular shapes of the origami star. The front of each triangle is broken, with fragments attached to the inside and back of the model as though a bullet had passed through the middle. The bullet represents destruction and was extrapolated from my poster. 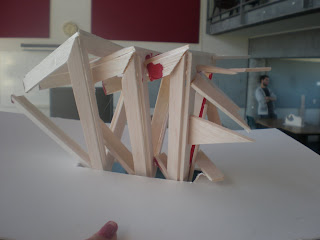 The poster is based on a Sin-City/comic type theme, featuring a business man in a hat committing suicide. The paper around the top of his hat is cut and folded back, relating back to the idea of the fold. The jagged edges and hole in the paper are as though the paper itself has been subject to a destructive force. 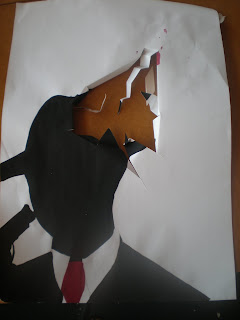 On the other side of the paper, the folds of the paper can be seen, as well as scraps of balsa wood, newspaper, and black and red splatters of paint. This is the end product of destruction, and the fragments of something that used to be whole. 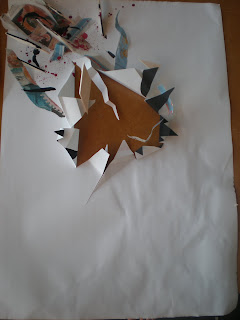